A.1. Background of SDS:  Shariatpur Development Society (SDS) has started its journey 25 years ago through a humanitarian support to the people affected by the natural disaster. SDS is now one of the reputed development organizations in middle-south part of the country. A group of Journalist, Red Crescent worker, Business personnel, Lowers and Doctor has taken this initiative to support the poor and destitute people affected by the natural distaste. In 1992 and in 1993 SDS had obtained registration certificate from Social Welfare Department and NGO Affairs Bureau respectively. In 1993 it has launched its project namely “Women Empowerment” with the financial support of OXFAM GB. The micro-credit activity had been started from 1996 with the support of PolliKormo-Soayok Foundation for the poor women in the rural areas. Besides micro credit activities the organization has started activities on education, health, family planning, legal support to the family, WASH and disaster management.

In 1998 during flood, SDS had support the people by providing food, cloths, treatment and rehabilitation activities during the prolong flood in the history. In 2004 and 2007 SDS has taken significant role to support the destitute and poor people affected by the tornado called SIDR which has establish good reputation in the community. SDS has contributed and aware mass people in the process of establishing democracy during national and local government election as an election observer. SDS has developed good relationship and image among the national international donor community through its good work. Beyond the PKSF micro credit support, the organization had implemented number of projects with the financial and technical support of OXFAM-GB, OXFAM-Novib, EU, UNDP, WFP, UNICEF, Concern World Wide, Save the Children, ICDI-Netherlands, Max foundation, ACF, USAID, Christian Aid and also implement number of project with GoB. With the hard work of the SDS staff, the organization is now one of the best organization in middle-south part of the country. Around 200,000 poor people are now self sufficient through the benefit of different activities.

Disaster Management and climate change:
Shariatpur is one of the most disaster-prone areas in Bangladesh, One third area of the district are char area that separated from the main land  by major  rivers, f The Padma, Meghna and Kirtinasha. River Erosion and flood are the annual phenomenon that displace a bulk of population and make them homeless. As the district is surrounded by rivers and is low-lying every year flood, river erosion and other natural calamities hit in the area.

SDS is providing emergency and long term humanitarian support since its inception.The organization demonstrated asa national example in humanitarian ground of middle-south part of the country during the flood in 1995, 1998, 2004 and also SIDR in 2007. Till date the organization has been implemented 21differentprojects related to disaster management and climate change. About 700,000 people were served by those projects. Different relief items were distributed among the 200,000 (approx.) families.After cyclone SIDR, around 1200 people were supported to permanent rehabilitation and around 4000 families supported for temporary shelter. Moreover 950 land less families were got government khash landsupport through the advocacy initiative of SDS.

SDS is giving special emphasis on the right of the women and children. “Protection of women and children rights” is one of the mandatory principal out of eight basic principal of the organization. Since inception of the organization is implementing different projects to ensure the protection women and children. In every project about 70 projects, the organization consider the rights issue of the women and children with special importance. Women participation and increasing the number of women involvement in the primary school management committee, the existing GoB policy has been rectified through the advocacy initiatives along with other like-minded organizations. The violence against women and children, child marriage incidence have been improve through different preventive initiatives. With the support GoB administration and SDS initiatives all of the upazills of Shariatpur have been declared as child marriage free district. A total of 24 girls sports team with the participation of adolescent girls have been formed and they are regularly practicing football, hand ball and 150 girls have been trained on karate training which make self-confident, this is a significant achievement of SDS. Approximately 70,000 change maker have been grown up to strengthen the social movement in protecting women and children and the change makers are making noise when they notice any incidence happen in their area.

The agricultural development initiatives has contribute a lot in the community as well as in the country. Especially the women farmers were involved in the productive agricultural through 14 different project through SDS women groups. In 2013 a woman farmer namely Shefali Begum was obtained national awarded as best women farmer. SDS has introduced the modern technology among the farmers which inspired them to do better farming, the new variety of seeds have also been enhanced the new strategy of production. In 1998 through a project the women farmers were introduced a profitable vegetable production in Zaziraupazilla. The direct project beneficiaries were motivated to cultivate profitable vegetable production which called as vegetable production revolution in the community. The produced vegetable are now fulfilling the local demand and other part of the country including the capital city Dhaka. Beside the government agriculture official SDS’s 4 Agronomist and 15 diploma Agronomist continued their intensive support to the farmers living in Zanjiraupazilla. With the support of different donor organization SDS has introduced different modern technologies and strategy of using gutiuria fertilizer, AWB technology for paddy production, sex ferment trap for vegetable production, and technology of producing round the year vegetable at the court yard etc. An initiative has been taken place for rearing domestic animals and fish cultivation through agriculture unit of SDS’s working areas. The organization has introduced agriculture value chain project to ensure the fair price of the agriculture product. SDS is motivating the people living in the char areas for planting the medicinal plants.

The marginalized people of the SDS working areas were provided health especially reproductive health support. From 1994 through 19 projects on life and livelihoods the health issues were given special attention. By using organization’s own fund 4 paramedics were assigned to provide health support through different branch offices of SDS. Presently 2 paramedic and 12 health volunteers are continued their support health especially reproductive health issues to the people living in the remote char areas. A total of 500 Traditional Birth Assistant (TBA) have been trained to provide support during pregnancy period. Those health initiatives motivated people to take care during the sickness and they are now going to government health center. A total of 30,000 poor patients were provided free treatment support by the MBBS doctor.

Almost 10 projects on education expansion initiatives have been providing education facilities among the marginalized community. In 1994 to 1996 SDS had implemented non-formation education initiative of the Primary and Mass Education Ministry of GoB. After that different donor organizations like Concern Worldwide,European Union, OXFAM GB, OXFAM Novib, Big Lottery, have invested their time to promote educationthrough SDS. From 2007 SDS has established school called “SDS Academy” and this school is now extended its education facilities up to class 7. SDS is continued its formal and non-formal education for children living different char areas. Out 14 non-formal education center 1 has been transform into government

In 1994 SDS has started its activities on water and sanitation throughout the municipality area of Shariatpur. Later on the activity launched in all upazillas of Sariatpur district, Madaripur, Norial, Bagerhat and Barguna district. Since inception of this activity the organization was able to established more than 2000 sallow and deep tub wells through 19 different projects, around 200,000 people of those communities are enjoying the benefit by getting water supply. Parallel SDS has distributed and build 10,000 heathy latrine among 200,000 family and this initiative contributed a lot in the declaration 100% sanitation by the GoB. In SDS’s working areas the open depiction rate has been decreased up to 1% which was initially 60%. Around 85% generalpeoples are now doing positive behavior about their personal hygiene.

Geographical coverage:In the beginning, the activities of SDS were limited within the Shariatpur district but gradually  it has extended its activities in 14 districts of the country through different project.Now the organization is workingin 8 districts of Bangladesh and they are Shariatpur, Madaripur, Rajbari, Gopalgonj, Faridpur, Munshigonj, Chadpur and Dhaka.

A detail of the current geographical coverage has given bellow: 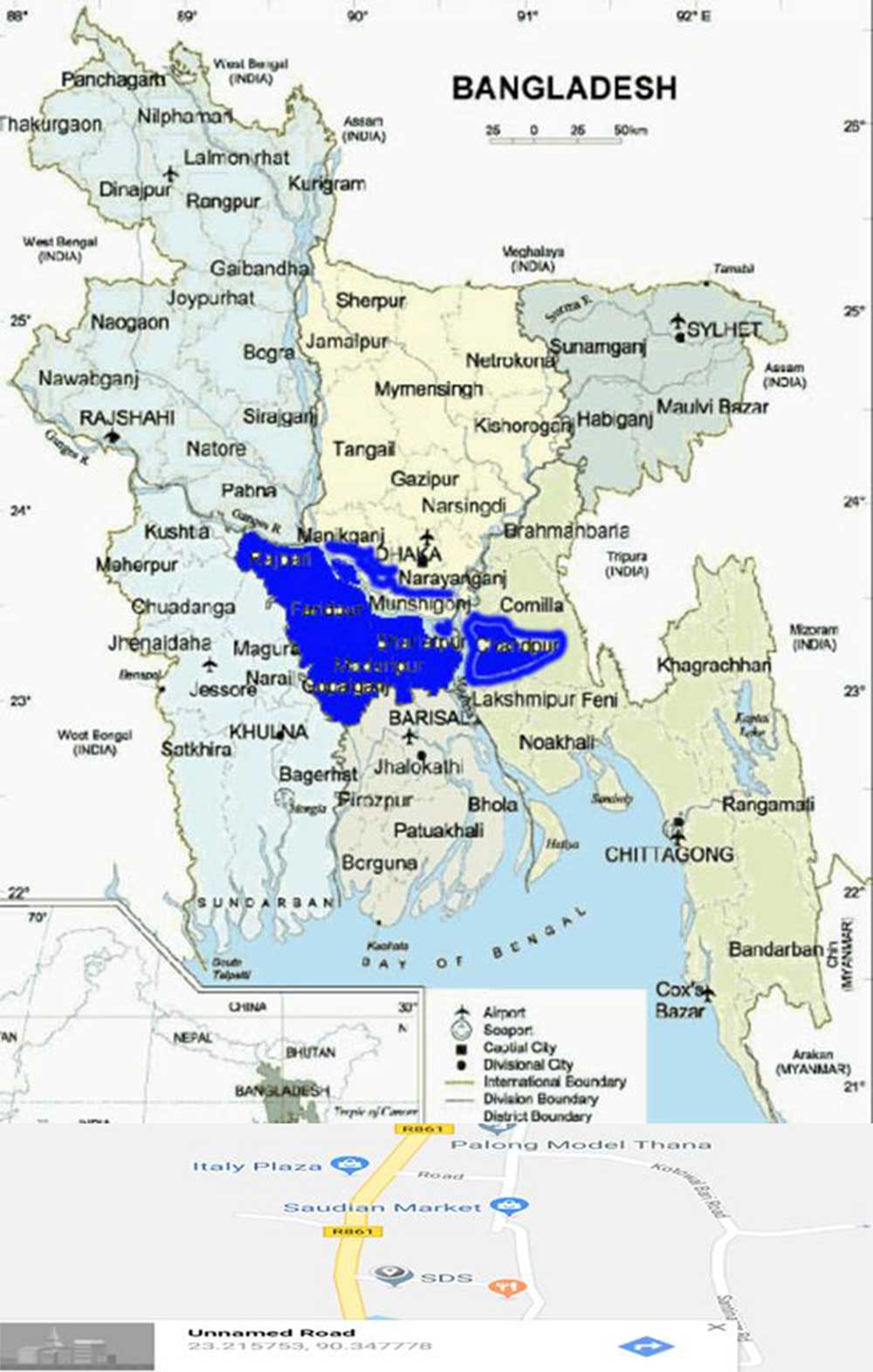 Vision: A just society without poverty, equality for everyone, decent place to live

Mission: The mission of SDS is to facilitate initiatives to work with underprivileged people to uplift their present situation. SDS is also committed to collectively work towards establishing economic, social, cultural, health, political and environmental rights as well as to bring about accountable and transparent governance system at all spheres of the society.

General Committee consists of 31 members. They are from different culture and profession such as Lawyer, Journalist, Businessmen and group members. The members of the Executive Committee are normally elected by the members of General Committee with the vote of raising hand. General Committee meeting holds once a year where the major part of the decision are taken to execute the task of any change of Institutional structure, Infrastructural development and further expansion of its operation in the field as well as approve annual budget of the Organization.